I found out on Friday that foraging for chanterelles is more than a walk in the woods.

I’d brought along a basket and a bag to forage with my friends, Anne and Chris. I wore my heavy coat. My Bogs kept my feet dry but weren’t the best for gripping slick logs that were lying across the path. I wrangled my camera as we climbed, ducked and scrambled through the brush.

I was under the high trees listening to Chris explain her method for finding chanterelles. 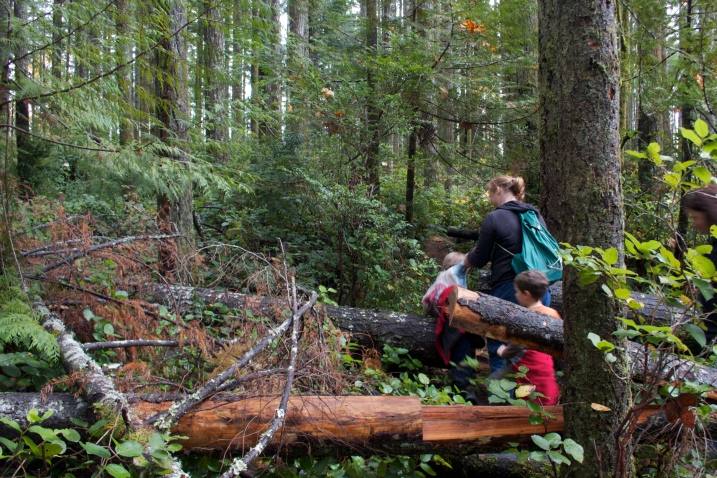 They don’t like to be under anything, she says, so you don’t have to dig through the fallen leaves (that’s what I was doing). They prefer miniature clearings, along the sides of fallen trees or under the canopies of certain bushes.

Chris says the area where we were is prime for mushroom hunting. But this year there are almost none.

We still spotted some, though. Emerging from spongy drifts of pine needles and spent leaves.

The correct method for picking a chanterelle is a shifting piece of advice. Lately Chris has been twisting the mushrooms free, gently pulling until the whole stem and a portion of the mycelium comes free. She shrugs. A few years ago, everyone said the mycelium should remain undisturbed and foragers were instructed to bring a pocketknife and make a clean cut.

I was happy taking pictures and peering at the chanterelles others found (Chris’s son has an eye). Then I started looking at the miniature clearings all around me, scanning each section several times before moving on.

There; to the right of a log frosted with moss and shrubby growth. A decent sized chanterelle. I gently tugged on it and saw that two were growing together. Then I saw another, not 18 inches away. I stood up, scanned again and found two more. Chris says she has this experience, too. It’s astounding, seeing nothing, over and over, and then – seeing something. Like the proverbial scales falling from your eyes.

The chanterelles were waterlogged and dirty. When I got home, I had to pick the pine needles off individually. But what a sight: heavy golden mushrooms from the forest. Laid out on a dish towel, they dried enough for me to cook a few into an omelet later that evening.

Yesterday morning I felt like celebrating. The election is over and it was a good day for progressives, me among them. I’m grateful. I’m relieved. I wanted something decadent and simple to celebrate: the rest of the chanterelles, shiitakes, butter, salt, sherry and a demi-baguette from a good French bakery. 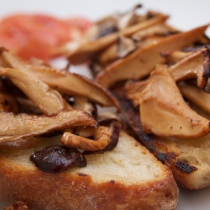 Sautéed Chanterelles + Baguette
for one

a portion of a baguette, about 7 inches long,
sliced lengthwise

Place mushrooms in the dry pan and cook, tossing or stirring on occasion to avoid burning them, until slightly browned and fragrant.

Add ¼ teaspoon of the salt and stir. Cook off any liquid released from the mushrooms and taste. If needed, add the other ¼ teaspoon of salt and repeat.

Add cooking sherry. Stir and cook until evaporated. This should only take a few moments.

Add 1 tablespoon of butter and toss to coat the mushrooms. Allow to sit over the heat until slightly reduced. Taste and correct the seasoning as you go.

Move mushrooms to one side, butter each side of the baguette with the remaining tablespoon of butter and place baguette halves butter-side-down in the pan. Leave them, pressing down on them if you need to, until butter is melted and edges are starting to brown.

Remove bread to a plate and top with warm mushrooms. Offer up a toast (get it?) for whatever wild or simple thing you’re grateful for today.