Last week my son asked to pick out some apples and put them in the cart himself.

Right on. A shopping trip used to be a dash for the cash register before the meltdown. Or a lesson in bribery. Now the kids like it when I send them off to pick out a few onions or a head of broccoli.

Close to a dozen varieties of apples were nestled into display cases and arranged in a group of baskets near the tomatoes. Which ones would he go for today?

The Fujis, of course. The very same ones we bring home so often throughout the rest of the year.

He counted them out, placed them in the basket, walked me over to show me which kind he chose. I wasn’t about to reach for the Akanes.

But there were more varieties there than I’ve tasted, more than I can recall. I felt sore with a desire to pick out one of each, label them and hold a tasting party all afternoon.

The Fujis ran out just about the time I needed to pick something up to cook for you this week. Squashes are beginning to take over a section of the produce department, their hard shells gleaming like tropical beetles lining a display case. But squashes keep and apples, other than the tried-and-trues, will be gone in a few weeks. 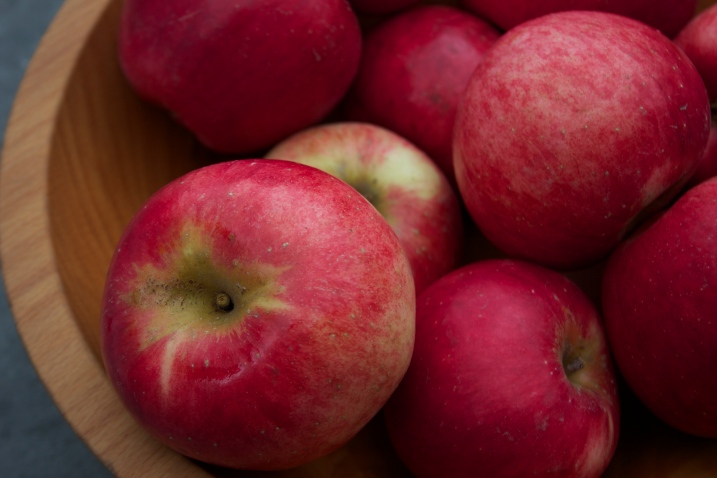 I chose a dozen Freedoms for their beauty (pleasantly squat; streaky red skin), not connecting that the name dovetails perfectly with election season. As you make this pie, don’t think about the tiresome ways the word “freedom” is used (slathered lavishly on bumper stickers, for instance). Think about the real word, the power to think and act based on your best judgment, and go put that power into practice. Vote.

Better yet, vote early and make this pie as a reward.

Freedom apples are so named because of their freedom from apple scab. Bred to be disease-resistant, they also taste good – “sprightly,” as the 1983 bulletin announcing the variety puts it.

I found them sprightly in this pie. They kept their flavor after cooking and paired well with the ginger to make a rich filling with a little edge. Think about that as you vote this week. Democracy can be just like this pie: disease-resistant, edgy, rich and downright fulfilling. If you participate.

1 recipe of your favorite pie dough, enough to make a top and a bottom crust

Split pie dough in half and form each half into a ball. Flatten to a disc, cover tightly and refrigerate for at least 30 minutes.

While the dough is chilling, combine the apple slices, syrup, ginger, cinnamon, lemon juice, cornstarch and salt in a large bowl. Toss well to coat apples and allow to sit for 20-30 minutes.

Roll out half the dough and lay flat in a 9-inch pie pan. Pour the filling in and dot with the butter. Roll out the other half of the dough. Place the second round of dough on top and crimp the edges to seal. Cut vents in the top with a sharp knife.

I took a cue from Cheryl Sternman Rule, who lauds the glories of pistachio dust, for the topping. Place pistachios in a miniature food processor and whir to reduce them to small crumbs (or crush them using a mortar and pestle). Mix pistachios with sugar. Lightly brush the top of the pie with water and sprinkle pistachio mixture over the top.

Place pie on the center rack and bake for 30 minutes. Watch carefully and cover with a tent of foil if the crust gets too brown. (Whoops. Mine got a little toasty.) Reduce heat to 375° and cook another 20-30 minutes, until the filling bubbles up through the vents.

Allow to cool for 2 hours before serving so the slices keep their shape. 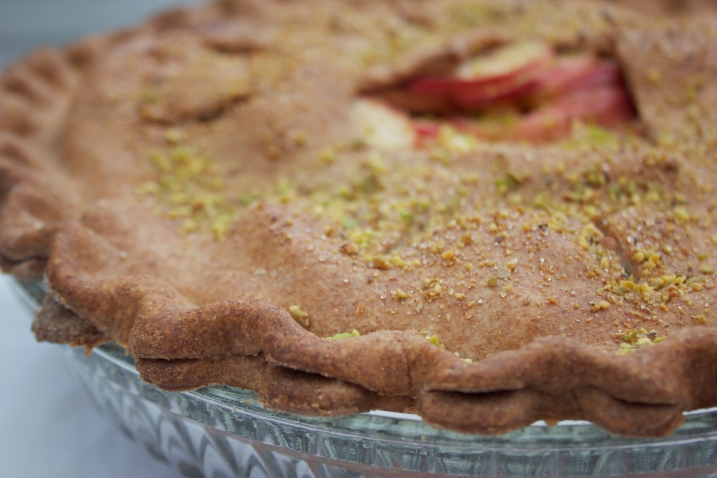 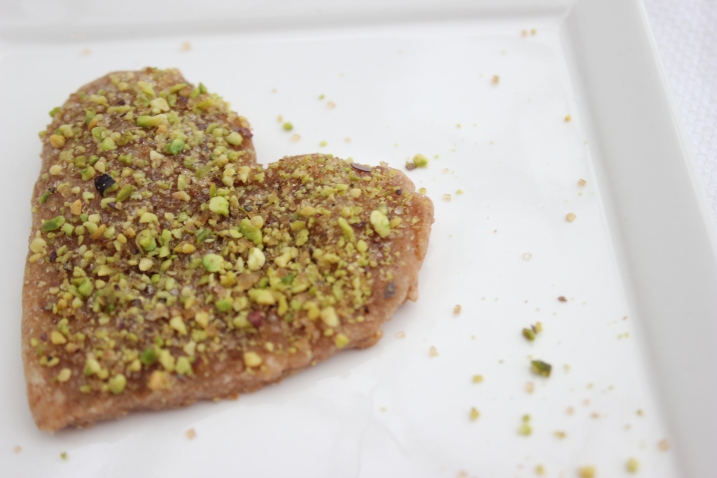