A woman smiled at me as I was walking back to my car. This was before she saw the bouquet under my arm, which was capacious enough to form a physical barrier between us. When she saw it, she smiled more.

“Are you pickling?” she asked, in a way that was less conspiratorial than envious.

I needed that sliver of admiration. The dill bouquet was the showiest vegetation I’d ever carried through this parking lot. What if I let it sit in its blue crockery vase on my counter until the stalks rotted?

So I read. How much salt? Is it best to weigh or measure? Do I need to boil the chlorine off the tap water first and, if so, should I let it cool before swirling in the salt? Should I dump my cleaned, de-bloomed cucumbers into the crock and then everything else on top, or layer them with the other ingredients – the garlic, peppercorns, dill and grape leaves – before pouring in the brine?

The sources didn’t disagree so I picked a recipe and leaped, by way of cleaning cucumbers. I broke the cloves off four heads of garlic and peeled them. Then, the layers. (I did not, by the way, boil the water.) 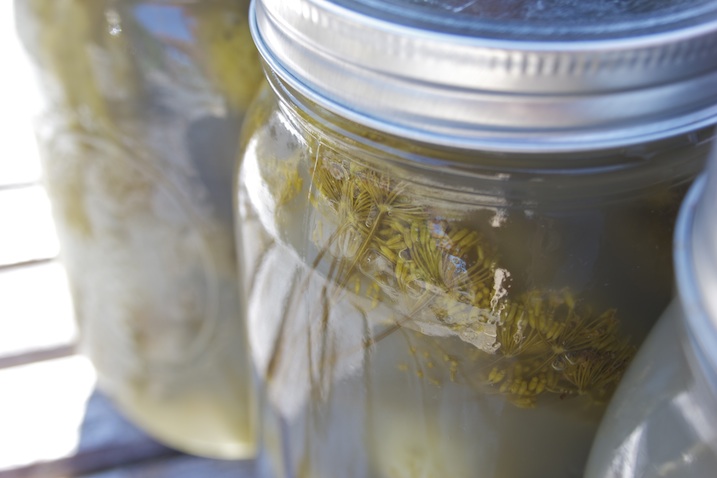 Pickles take less time to brine in the summer. Still, in the two weeks between my late-night pickling session and yesterday, when a bite revealed that the cukes had become translucent all the way through, we had time to forget about them and celebrate something other than springy, fresh dill and pilfered grape leaves.

I made bread. I don’t quite have the scoring thing down and it stuck to the towel a little, but I’m proud of how it looks!
The pitas puffed nicely.
I’ve really missed my afternoon lattes.
Yesterday. #quaranteatime
Someone’s enjoying the quarantine.
I barely had time to snap this photo and post the other day. For Cyrus’s birthday (and, really, for his seventh-grade project) we went up with one of his buddies to help build a nature trail with a group of 16 people through @washingtontrails It was so awesome. And these kids had fun, worked hard, stayed positive, and felt really accomplished at the end of the day. The perfect way to celebrate a great kid and launch him into his teen years!