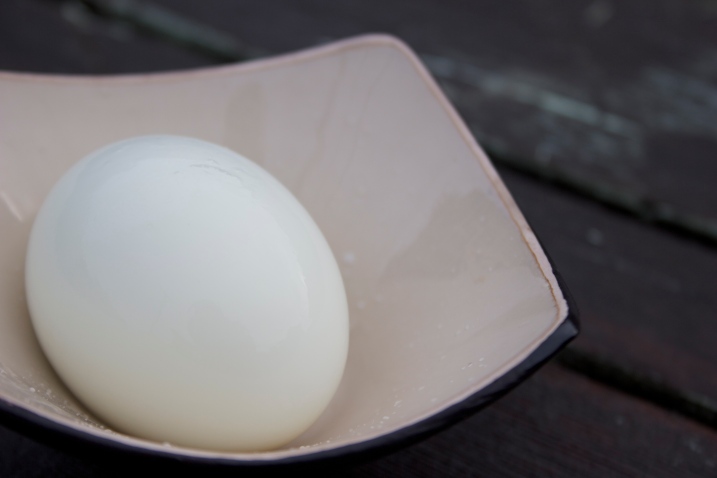 It’s simple to hard-cook eggs. Cover them with cold water, place the pot on the stove and bring the whole thing to a boil. Remove from the heat. Cover. Forget them.

That’s what I did yesterday. It was one of those no-shower mornings when I spent half an hour making lunches because there were no leftovers and the fruit basket was empty. My son said he’d eat a hard-boiled egg, or at least the white of it, so I plunked five of them on the stove and went back to peeling a cucumber.

This afternoon I discovered them (no, I hadn’t remembered to put one in his lunch). I felt lucky, even though I’d constructed the circumstance myself. Ten minutes before I had to pick up the kids I was peeling an egg and sprinkling it with Kosher salt.

Eggs and salt. They taste good together and happen to be topics that were covered at classes I attended at The Pantry at Delancey. In the fall a friend of mine had to give up her spot in a food writing class and, in a generous gesture, offered it to me. Hot dog! Or, rather, hot poached egg! Our instructor, Seattle-based food writer Sara Dickerman, structured our discussion around excerpts by a handful of food writers on the plain and perplexing egg.

What I remember several months later is this: common doesn’t mean simple. There were thousands of words, dozens of recipes, page after page describing how to poach or scramble and a treatise on the omelet. I don’t think I learned a thing about cooking them. (Eggs are fussy. You won’t learn to cook them by talking about it.) But I found the writers’ devotion astonishing. An egg is a single thing, an ordinary ingredient, but they were willing to explore it – the idea of the egg, the behavior of the egg, its flavor and texture and origin. It made me realize I can write about anything if I’m willing to be the risky sort. Dive in and mine that sucker. You’ll find something to say. And it may turn out to be something interesting. 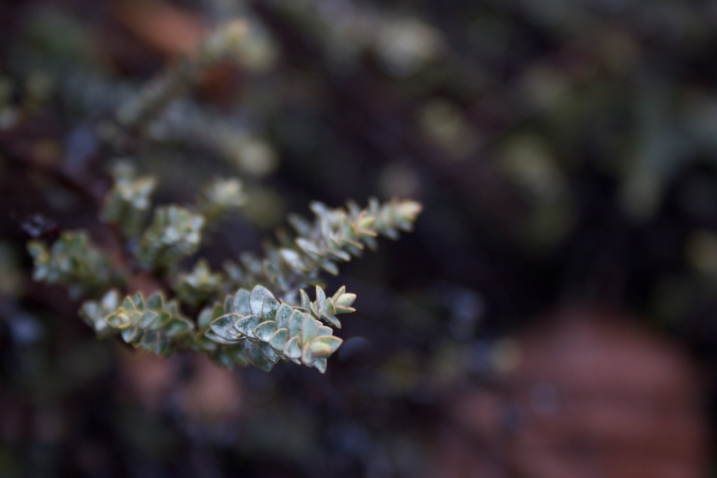 On Friday I made the drive to Ballard again, this time with my husband, to attend a cooking class on vegetable preparation. We helped prepare four dishes by mincing garlic, chopping kale and slicing Brussels sprouts into diminutive slivers (I never thought to slice them, other than in half). Funny things happen when you’re in a roomful of strangers, and I found myself, when we went around the table making our introductions, saying that I was taking the class because I “don’t eat many vegetables.” Oh, sweet love. What I meant was that I do indeed eat lots (lots and lots) of vegetables but aside from recipes I prepare for this blog, I tend to cook them in the same ways over and over again. Soup can be revelatory but on a Tuesday night usually ends up to be lentil instead. Green salads are ubiquitous at our table but my son won’t touch them. Casseroles, if I attempt them, turn out gloppy and uninspired (though I suppose casseroles are, in general). On desperate nights I sweep whatever produce we have from the bottom shelf of the fridge and dump it all into the wok. If I tried to parse it out, I’d end up vacillating between lack of time and lack of creativity as the primary culprit.

It’s neither. Instead, it’s salt. That’s what Olaiya Land taught us. Not enough salt. Or salt added too late in the cooking process to make any difference. All that poetry on food blogs about adding enough salt to the pasta water so that it “tastes like the sea” is right on the money. But not in the lyric sense. It’s literal. Don’t add salt to pasta water a pinch at a time, Land says. Pour it in straight from the box. A taste should take you back to that day at the beach when the waves knocked you over and you sat up, dazed, with a noseful of sand and stinging, briny water.

It’s been drippy and mild but still, it’s winter. So last night I made another pot of soup. This one was a reliable minestrone, satisfying despite (or perhaps because of) its short list of ingredients. Onion and garlic. Some tomato paste. Broth and whatever vegetables are afoot, in this case a bunch of collards and half a head of cabbage. I made it the same way I always do but this time I added salt at each turn, starting with the onions as they cooked. Then a little on the garlic as I chopped it up. I tasted the broth and added more. The pasta, cooked in a separate pot, was so salty when I tested it that I thought I’d ruined the dish. But after I drained, rinsed and added it to the soup, it was fine. It was better than fine. My pasta had flavor, maybe for the first time ever. My son lapped up the cabbage (I think he thought the strips were noodles) and both kids asked for a serving in their lunchboxes. That’s a first. So it was when my husband said that this time he didn’t need to correct the seasoning in his bowl of soup at all.

8 thoughts on “On eggs and salt”

I made bread. I don’t quite have the scoring thing down and it stuck to the towel a little, but I’m proud of how it looks!
The pitas puffed nicely.
I’ve really missed my afternoon lattes.
Yesterday. #quaranteatime
Someone’s enjoying the quarantine.
I barely had time to snap this photo and post the other day. For Cyrus’s birthday (and, really, for his seventh-grade project) we went up with one of his buddies to help build a nature trail with a group of 16 people through @washingtontrails It was so awesome. And these kids had fun, worked hard, stayed positive, and felt really accomplished at the end of the day. The perfect way to celebrate a great kid and launch him into his teen years!