I confess that I’m still distracted by last week’s mushrooms. I love to photograph mushrooms of any stripe – and eat them – so anything that has to follow is at a disadvantage. Big green leaves just aren’t as exciting as something you can mistake for a piece of ocean coral, as another blogger put it.

That’s where I am today. But I can get excited about anything, even collards. They’re lush, yes? And grown right here in the Northwest, so that’s good. At least, that’s what the label on the shelving said in the produce department. But when I got home, I read the label on the giant twist-tie around the stems: “Product of California.” Darn. Sorry for my inattention. But they’ll be harvested from local soil soon enough.

Collards blanch to a zingy green color and keep their shape so making a filling and rolling it up in a neat little packet is, voila!, not so hard and awfully pretty after all. Not as pretty as the oyster mushrooms, mind you, but I’ll take it.

So here’s what I did. I figured I could combine obsession with necessity and include mushrooms again. When I found this recipe over at Smitten Kitchen, I was excited to make it into a hearty veggie meal with mixed mushrooms instead of the requisite ground beef. And, boy, was it good.

I love the bones of this recipe, especially the addition of parsnip to the mirepoix. If you’re making this in real time with me, go ahead and core your parsnip. It was likely harvested late and has been cellared for quite awhile by now so it has a stringy, wood-like core that won’t soften in the sauté pan, something I learned from Denis Cotter in Wild Garlic, Gooseberries…and Me. If you eat parsnips in the fall, right at the beginning of the harvest, you can disregard this advice – the cores will still be tender as a carrot. (As the ellipsis suggests, this is a dreamy cookbook, its author meandering over the English countryside collecting seasonal produce and incorporating into unbelievable sounding dishes such as Cabbage Timbale of Celeriac and Chestnuts with Porcini and Oyster Mushroom Sauce. I received a copy a couple of years ago and it has increased my fresh produce vocabulary – puffball, anyone? –  and expanded our kitchen repertoire.)

Before we jump in and stuff some greens, I’m going to lament the passing of spring with you for a moment. I’ve had these photos saved up to include in a post sometime soon and now I’m finding that the photos I took just a couple of weeks ago are passé: the flowers shown here are now in various states of shriveling. The lilac is past its prime; the bleeding hearts don’t hang so dewy and plump anymore. But anyway they were beautiful and other flowers are blooming so all’s well. And the dandelions’ unabating cycle will be with us until the frost. 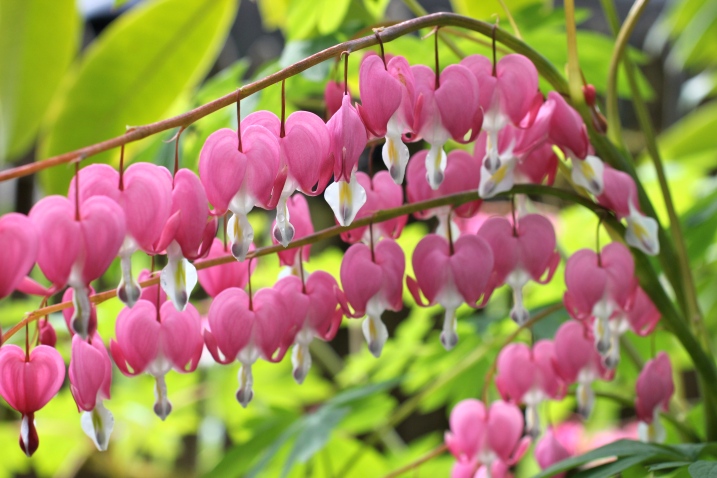 Now, back to the collards.

They are one of the scary greens, one I never thought I’d like because of an aversion to produce that’s cooked and cooked until the color seeps into the cooking water. Oh, and tossed with something I no longer eat: bacon. No thanks.

But there’s more than one way to cook a giant leaf. These were tender after blanching in the saltwater and kept their shape and mild flavor, though they lost the bright green color,  after cooking for quite a long time in the tomato sauce  you won’t cook yours as long – see my note below the recipe).

They were a hit three-quarters of the way around our table, a unanimous vote quashed only by my increasingly green-phobic son. Though, for the record, he will now eat a green smoothie if I assure him it is so because it contains kiwi and honeydew – never mind the parsley – and call it, as a friend said she does with her own boys, a Hulk smoothie. Brilliant woman!

Enjoy this one, friends. 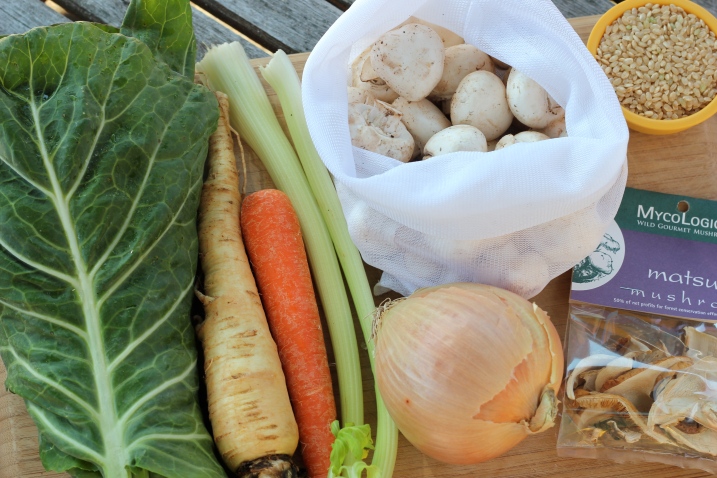 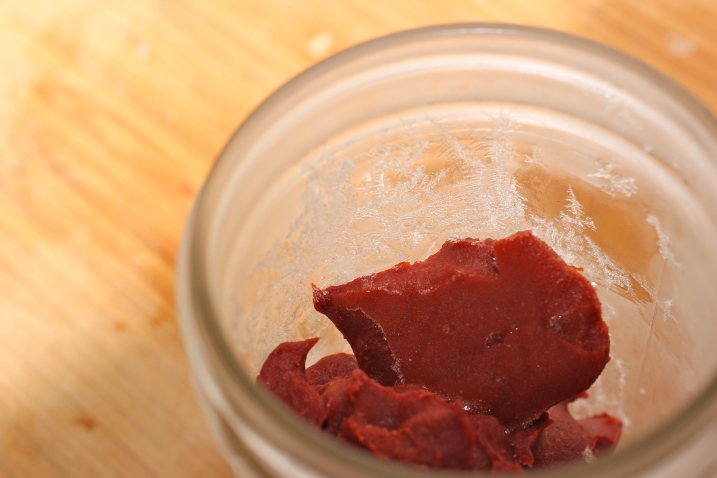 Bring a large pot of salted water to a boil. Prepare a large bowl of ice
water and place near the stove top.

Wash and stem collards and blanch in batches in the boiling water for 2
minutes. Remove and immediately plunge into the ice water. When cooled,
remove to a plate and set aside.

Heat the oil in a sauté pan or pot. Cook the onions until they are soft then
add the carrot, celery and parsnip and sauté until slightly softened. Add fresh
mushrooms and several grindings of salt. Sauté until mushrooms have reduced.

Add rehydrated dried mushrooms and cook for another few minutes. 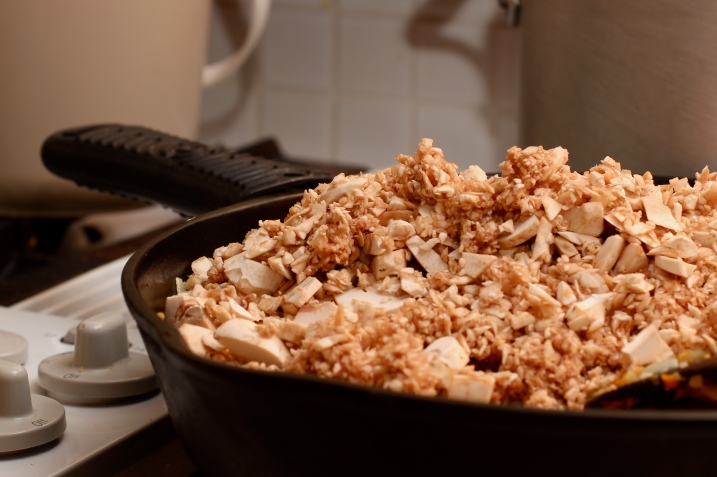 Push ingredients to one side, add a small pool of oil to the empty side of
the pan and sauté garlic in the oil for 30 seconds, until fragrant. Stir to
incorporate with the other ingredients and season with more salt and pepper.
Transfer the mixture to a bowl to let it cool a bit. Mix in the rice and tomato
paste. Taste and adjust seasonings.

Dry a collard leaf and place on a work surface. Cut out the thickest part of the
vein and pull the ends together to overlap at the bottom. Roll about ¼ to ⅓ cup
of filling in each leaf (depending on the size of your leaf) and arrange in a large,
wide pot, layering if necessary. Pour in enough sauce or juice to cover the rolls. 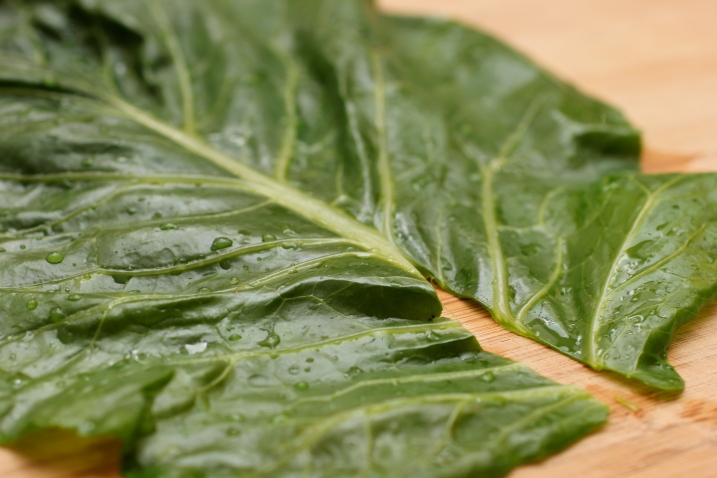 Bring to a boil and reduce the heat, letting them simmer covered on the
stove on low for about 45 minutes.*

Serve immediately. If sauce has thinned a bit, you can heat up any additional
sauce you didn’t use and pour it over as you serve the rolls.

*If you’re using uncooked white rice, you’ll need about this much time to ensure
the rice cooks. I used uncooked brown rice and ended up simmering the rolls
for over an hour and a half before the rice was done. If you opt for uncooked rice,
especially brown, be sure you have plenty of sauce (I didn’t) to keep them hydrated
and less prone to burning. If you use cooked rice, you’ll just need to cook enough
to heat through, for 20-30 minutes. 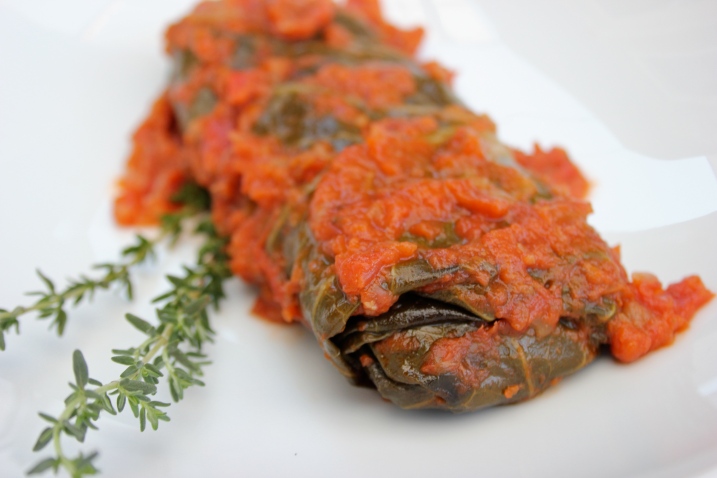