Since I didn’t know what to cook the other night, I asked my daughter to gather some lettuce from the kids’ garden. We have to eat it soon, I’m sure. We’ve had weeks of warm, dry weather. It may only be the patchy shade from the cherry tree that has, so far, kept it from bolting.

She brought in a big handful and when I asked her to wash the leaves, the same way I’d ask Brian or my mom, she complained a little and then shrugged before getting the salad spinner. Maybe the tone of my voice was less motherly. The two of us were, after all, on our own while Brian and her brother were at baseball practice.

She swirled the leaves in the water-filled spinner while I cut up one of our cucumbers, only the fourth one we’ve harvested from the garden this year. Then I sliced some fennel and a Robada apricot and got out the bottle of California olive oil. I tossed the leaves with the oil and vinegar right in the salad bowl, like I learned from Molly Katzen, first oiling them to coat the leaves then adding acid and salt. I only used a capful of apple cider vinegar and some Celtic sea salt pinched from the mortar that sits on the shelf next to the cutting boards.

I photographed the salad outside, before the light went and before I remembered the cherries on the counter. These are so red their skins are black, the kind of cherry you had better not put in your mouth a bite at a time if you want to save your fingers and your shirt from staining.

A salad doesn’t lend itself to whole cherries, however, so I went ahead with the quartering, halving them with my paring knife first, then twisting them open and halving the halves. Doing it this way, the pit was left clinging to only one quarter of the cherry and I could cut it out easily with the tip of the knife. The other option is to pry it loose with a thumbnail. Even if the work had been as messy as I thought it would be, it would have been worth it. The cherries, against green and white ingredients, were the red of red velour. 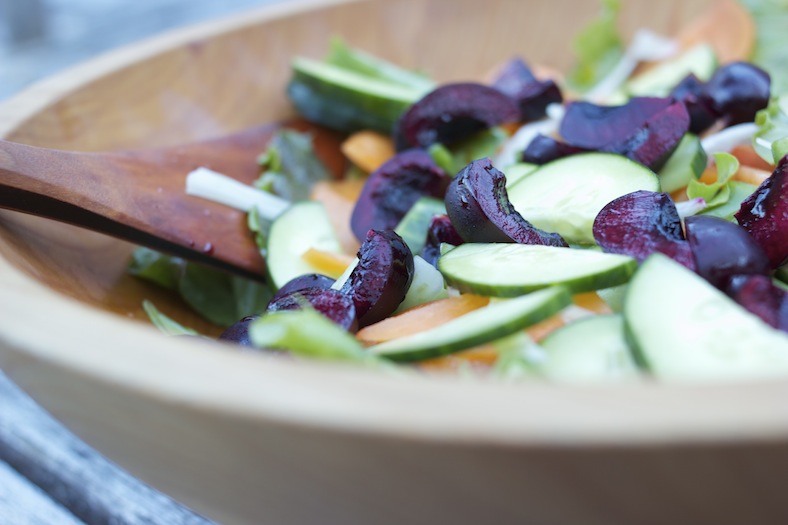 I sliced into a ciabatta and we ate a portion of the rosemary loaf, too, smeared with soft butter or dipped by the bite into more olive oil. She added her favorite pear-infused balsamic to her ramekin of oil. I ate some sheep’s milk cheese with mine. We both took big portions of salad.

Later that night, we were lying in her bed listening to Cinder before she went to sleep. The blinds were down partway and the widow was slid open, forming a rectangle that was open to the purple night. I don’t mean that in the poetic sense: the light behind the horse chestnut’s leaves was lavender. I watched its shade deepen as we listened to the story, our heads together near the speaker on the back of the device, and looked at the lanky kid next to me who is, now, old enough grow lettuce or mix up a vinaigrette and to make small talk over greens and bread and butter.

7 thoughts on “Cherries and the lavender air”