It’s late in the season for chestnuts but much better timing for me, even if eating them after the New Year is a little passé. Plus, there they were, nestled in a basket near the last of the California satsumas and a few varieties of pears in the produce department last week. I bought a third of a pound, no more than two fistfuls, without a thought beyond learning to roast them.

I know now that if I want to learn to do it well I’ll have to look for them in late October, at the beginning of their harvest season, so I’ll be able to make several attempts. That would be the time, before my to-do list becomes italicized and terse. Make the gift list. Order the cards. Bake something. Mail the packages. Get the teachers’ gifts. Oh, god – bake something!

That frenzy is past. It’s the first full week that the kids have been back at school. Apparently I’m still getting used to checking my calendar after two weeks off. And there’s rain. Nothing better to do during a steady, gusty rain than learn how to score a chestnut. 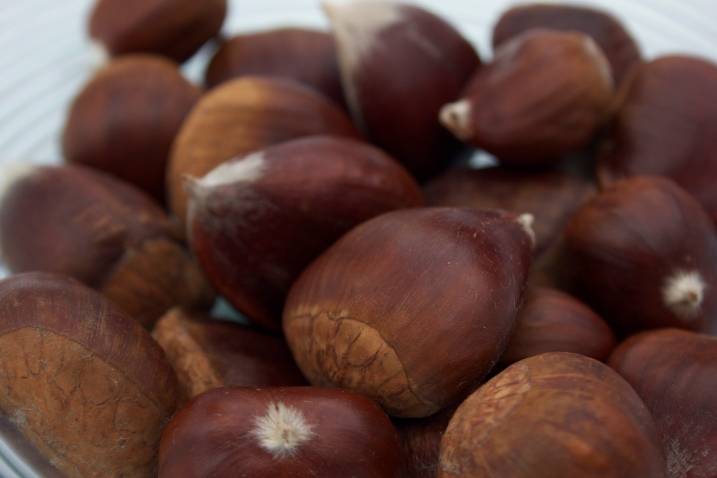 I should have watched this video, by Chef John Mitzewich of Food Wishes, before trying to “score an X” on each chestnut. As he notes, trying to cut an X into the hard shell with a flat knife, a common instruction, is dangerous and unnecessary. Also, kind of impossible. Better to score them once across the middle using a serrated knife. His technique is much easier than jabbing at them with a paring knife like I did on the first four.

He suggests a soak in salted simmering water prior to roasting in the oven, a step I should have observed. These chestnuts must have been dry to begin with (it’s the bitter end of the season) and then I overdid it. Mine weren’t a soft yellow but browned. A few were hardening to a chewy texture. Dang.

But even still. I’d never tasted a chestnut before. I had a vague notion that I’d combine the chestnuts with roasted garlic and edamame to make a dip. And maybe that would work as far as texture goes. But they’re sweet! I never knew.

Much better to chop them up and toss them with browned butter and toasted walnuts. Add a little cinnamon, too. Or not. They’re pleasant enough as is.

Prepare chestnuts as demonstrated in this video, scoring the hard shells once, being sure to cut all the way through to the nut inside. Cover with water, add salt and bring to a simmer. Fish them out with a strainer and roast on a rimmed baking sheet for 15 minutes. Peel while they’re still warm.

Chop chestnuts. Place butter in a skillet and cook until it’s a light caramel color and the milk solids are starting to separate. Add walnuts and cook, stirring often, until they’re fragrant. Add cinnamon, if you like, and a dash of salt and toss to coat. Add chestnuts and toss again. Serve immediately. 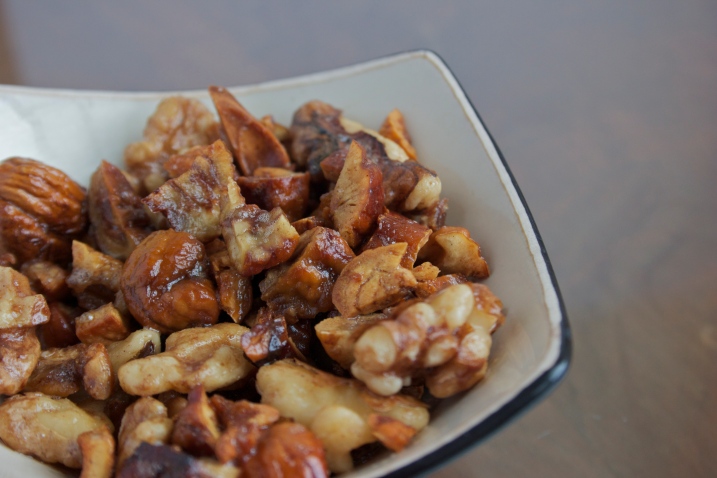