I went for a walk yesterday with our dog, Linden. For one-and-a-half-year-old, he’s less puppy than you’d think. He sits underneath my desk while I write or on his bed in front of the gas fireplace, snoozing or twitching his eyes toward the ceiling. He is patient with me while I tap the keys and eat lunch at my desk. I take advantage of his easy disposition, without meaning to, blowing off a walk around the block so I can get one more section written.

But yesterday, as I said, we did walk. It was going on late morning but still, the dew was in the air and on spider webs that were strung between dying leaves, hanging with drunk weight.

There were so many and every one had its own personality – full circle or broken wing. My chest tightened at the sternum when I looked at them, these transient, tender, temporary creations. I kept tugging on the dog’s leash so I could pull out my phone and take photos.

Tonight I’m playing hooky from a family outing so I can write and attend a neighborhood meeting. And the dog is not patient. He yawns a pesky arroohh behind me. Then he whines, softly enough that he knows I won’t scold him. When I turn around, he’s dropped the ball and nudged it forward with his nose. If I approach it slowly enough, I can pin it down with my boot, pick it up and throw it into the other room for him to chase.

This is fall. Work and play. Give up the plan sometimes and pounce for fun. When it’s a busy week, I’m glad that our share of vegetables still arrives every Tuesday, often with things we can eat straight from the box. More play and more work means less cooking sometimes, and I like that. And I like that a salad turnip can mean autumn as much as the dew and the dog’s twitching tail and the back-lit leaves. 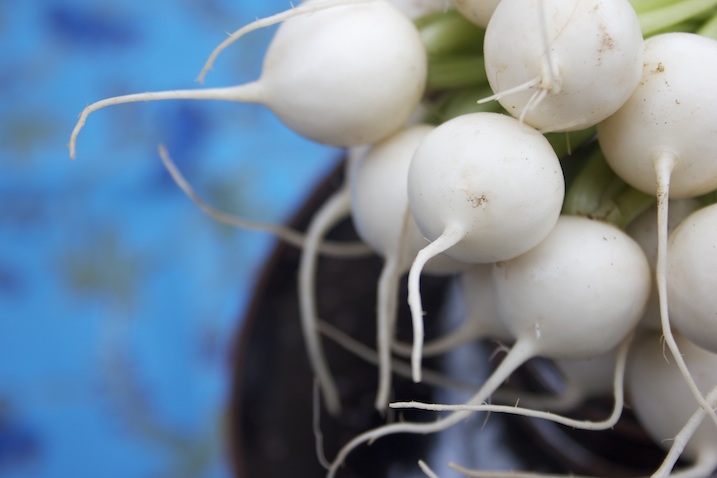